Check out the benefits of grapeseed oil vs jojoba oil for face skin in particular! 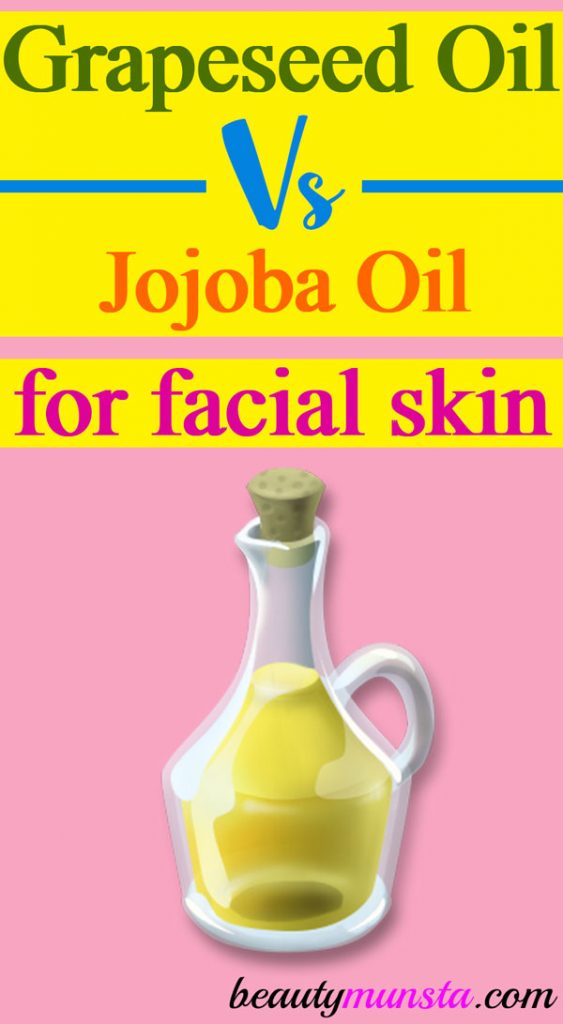 Facial skin is very sensitive and as such, you wouldn’t want to be using just any kind of oil on it! In this post, we’re going to be exploring between grapeseed oil and jojoba oil – which should you use for your skin type and what are their benefits?!

Grapeseed oil is a fairly common type of oil. It is favored for cooking just like olive oil but it also has great beauty benefits! Please read 15 Beauty Benefits of Grapeseed Oil to know about the profile of grapeseed oil (its shelf life, consistency, comedogenic rating, etc).

You’ve seen jojoba oil in many high end face oils haven’t you? This oil is excellent for skin care and it has a good reputation for skin of all types. And it’s actually a wax ester not an oil! You can read 12 Beauty Benefits of Jojoba Oil to get to know its ingredient profile and fantastic beauty benefits for skin, hair and more!

Okay, now let’s get to the main gist of this article: Grapeseed Oil Vs Jojoba Oil for Face! Here’s the breakdown of the benefits of grapeseed oil over jojoba oil and vice versa!

Why would you choose grapeseed oil over jojoba oil for your skin type? Here are some reasons:

So which oil is better for the face? Grapeseed oil or jojoba oil? From the above information, if you have oily skin or want a light moisturizer that’s non-greasy, I’d say go for grapeseed oil. Jojoba oil is good for those with sensitive skin, dry and mature skin, especially.

But of course, looking at the benefits of one oil over the other, you choose your pick! If you want to get anti-aging benefits, then go for jojoba oil. For scar reduction, go with grapeseed oil.

You’ve reached the end of the article ‘Grapeseed Oil Vs Jojoba Oil for Face Skin’! What oil have you chosen as best to use for your skin type?